One of the problems I have been working on is a way of thinking about people models.  I have had two stimuli.  First my son worked for Mark Warner (the holiday company) one summer and I was amazed to learn that he was paid almost nothing (€50 per week) and that his minimum wage was made up with the cost of his accommodation and benefits, such as use of facilities.  Yet there were three people applying for every job and he loved his experience working with Mark Warner:  he also did a winter season with them.   This seemed to me to be an interesting people model.

My second stimulus was that operating model work is about making choices.  So I began to lay out the choices that are made for different people models.  Choices about the sort of people to be hire – skilled or unskilled, motivated by money or by meaning, etc.  Also choices about the offer to these people – full time or part time work, above average or below average pay, etc.

This thinking evolved into a four column format for laying out a people model.  I have since thought that maybe it should be a two column model.  But here is the four column version.

Lets start with the first column: the type of people that you want to hire into the skill group.  Each item involves making a choice.  “Contract” is about the type of contract that these people want.  “Location” is about where the people live.  The next exhibit shows the choices made by McDonald’s for staff in restaurants and Eden McCallum for consultants.

There are different ways of laying out these choices.  The above is a crude Powerpoint with a misspelling of McDonald’s!   But the next visual shows a more attractive display of a skill group with three roles in it.

A similar analysis and series of choices can be made for the “value proposition” to the people you have decided you would like to attract.

And for the column “career path” 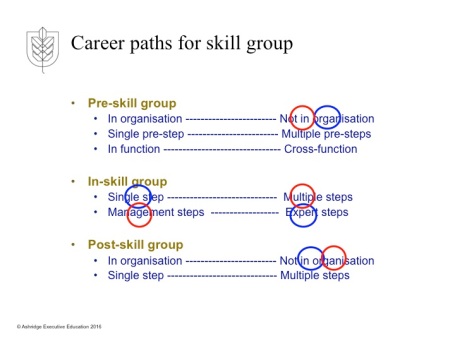 The last column on “culture” is more difficult to boil down into a few choice areas.   This of course is also true of the first three columns.  There are many choices that are not represented.  But the cultural values column is particularly difficult to illustrate in terms of simple choices.  So instead, I attach my summary of the people model for Mark Warner (my views not an official Mark Warner document!). 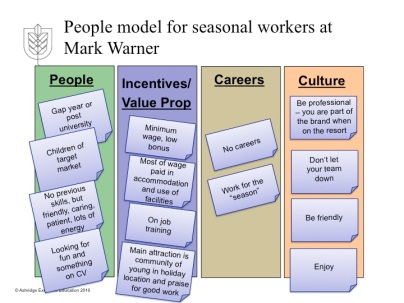 In developing this tool, I also realised that it makes little sense to create a people model for a company.  People models need to be created for important skill groups within a company.  yes a company may have an overall employer brand.  But it will not have only one people model.

Ashridge Executive Education Focus on strategy and organisation Currently working on group-level functions and group-level strategy
View all posts by andrew campbell →
This entry was posted in People model. Bookmark the permalink.