Posted on February 2, 2018 by andrew campbell

Last week I spoke at an interesting conference hosted by Loughborough.  It was to discuss their approach to operating model work – SOMS – standing for Service Operating Model Skills.  Also speaking were two consultants from OEE, who have partnered Loughborough on the SOMS framework: Martin and Vishnu.  This blog is about one slide that they showed which got me thinking.

The slide was a version of this matrix from the Slack and Lewis text book “Operations Strategy” third edition 2011, Prentice Hall.  The left side of this matrix is “Performance objectives” which leads to “market competitiveness” on the right side.   The bottom axis is operational “Decision areas” leading to “Resource usage” at the top of the matrix.   The boxes in the matrix are used to layout the main elements of the operations strategy or operating model.

This matrix is familiar.  But, for some reason, the way it was presented by Martin and Vishnu, using a case study of a bank, got me thinking in two ways.  First, if instead of “Performance objectives” we use “Value proposition”, the matrix would have the same focus as the Operating Model Canvas.  I will come back to this.   Second, if instead of “capacity”, “supply network”, “process technology” and “development and organization”, we use POLISM – processes, organization, location, information, suppliers and management system – the matrix then has the same decision areas as the Operating Model Canvas.

I have little doubt that the POLISM categorization of operations decisions is superior: more strategic, more complete and more managerially friendly.  It does not include capacity, in terms of numbers of people or size of machines.  But, for me, the sizing issue is a second order issue.  First you define the operations strategy. Then, given the strategy and the plans for the next period, you decide how much capacity to build for the next period? (I should point out that under the broad heading of capacity Slack and Lewis, include location and buildings, so it is close to the L in POLISM) 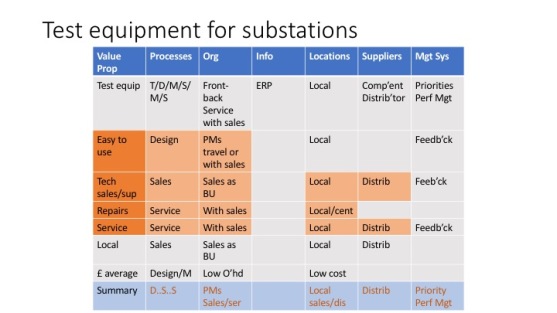 My conclusion is that one row should be devoted to describing the product/service: is it a piece of test equipment or a management course?  The rest of the rows should describe the main features of the value proposition, particularly those that are expected to give advantage (the USP) (coloured in reddish orange).  If POLISM is put along the top axis, the bottom axis can then be used to summarize the aspects of the “operations strategy” that are most important to each of the elements of POLISM: the words that you might expect to find on an Operating Model Canvas.   If you have used the Operating Model Canvas tool, you will know that you should describe on the Canvas, (in addition to the value chains and the org chart) those aspects of operations that are most important to delivering the value propositions: exactly the same thought as the descriptions in the Slack/Lewis matrix.

Of course the Slack/Lewis format has other weaknesses.  It does not lay out the value chain. Hence my lettering in the top left box of the examples (my attempt to lay out a value chain in a very small space!)   As a result, the Slack/Lewis format does not visually show that the OLISM parts of POLISM exist to help make the P of POLISM (the bit that creates the value proposition) work.

But, as I keep repeating in this blog series, it is always worth understanding other people’s frameworks because most will have a dimension that is better than your own model.